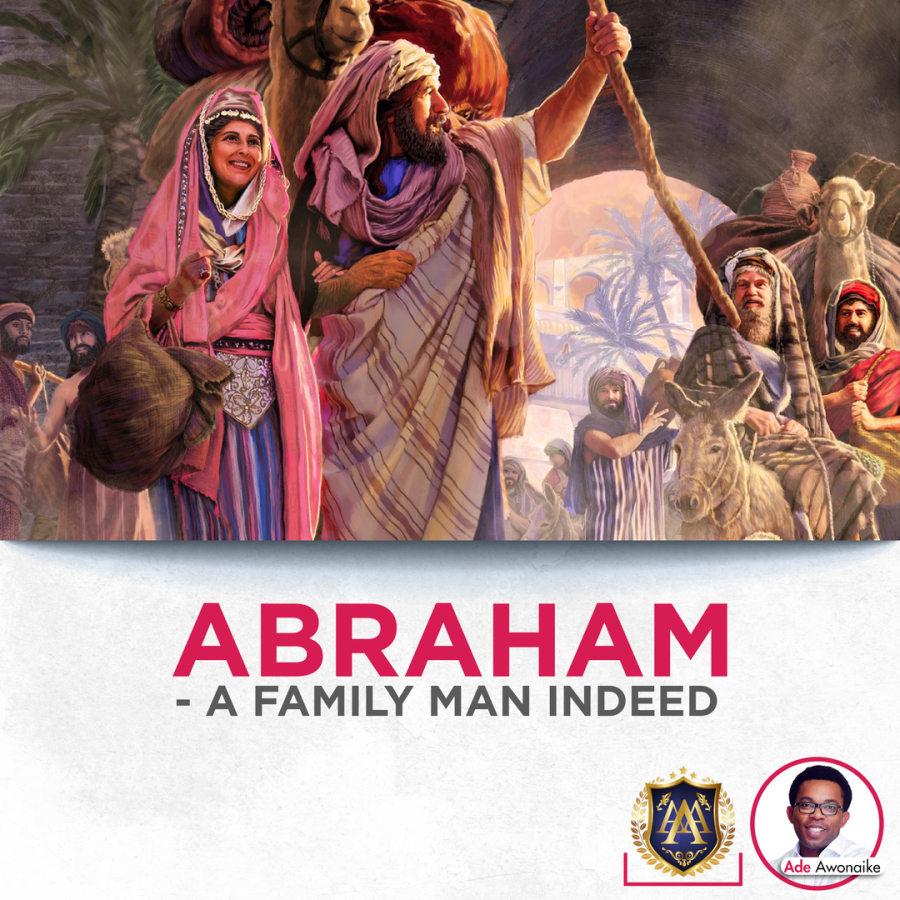 Today, we are looking to also learn from the life of Abraham as man that is indeed family inclined.

Abraham carried his family along with God’s Leading

Now the Lord had said unto Abram, Get thee out of thy country, and from thy kindred, and from thy father’s house, unto a land that I will shew thee:

2 And I will make of thee a great nation, and I will bless thee, and make thy name great; and thou shalt be a blessing:

3 And I will bless them that bless thee, and curse him that curseth thee: and in thee shall all families of the earth be blessed.

4 So Abram departed, as the Lord had spoken unto him; and Lot went with him: and Abram was seventy and five years old when he departed out of Haran

Even when there was a severe famine in the land and he went down to Egypt, Lot was with him and they both went up from Egypt together. Genesis 13:5 “And Lot also, which went with Abram, had flocks, and herds, and tents”

In Good times and Bad times, Prosperity and Famine, Health and Ill-Health… Family stays together.

And Abram went up out of Egypt, he, and his wife, and all that he had, and Lot with him, into the south.

2 And Abram was very rich in cattle, in silver, and in gold.

3 And he went on his journeys from the south even to Bethel, unto the place where his tent had been at the beginning, between Bethel and Hai;

4 Unto the place of the altar, which he had make there at the first: and there Abram called on the name of the Lord.

5 And Lot also, which went with Abram, had flocks, and herds, and tents.

8 And Abram said unto Lot, Let there be no strife, I pray thee, between me and thee, and between my herdmen and thy herdmen; for we be brethren.

10 And Lot lifted up his eyes, and beheld all the plain of Jordan, that it was well watered every where, before the Lord destroyed Sodom and Gomorrah, even as the garden of the Lord, like the land of Egypt, as thou comest unto Zoar.

The herdsmen of Abraham and Lot did not understand the place of unity and harmony in family life hence the strife they allowed to flourish between them.

The question is, did they see anything shot of love, peace and harmony between Abraham and Lot their bosses?

Abraham said in Genesis 13:8 “And Abram said unto Lot, Let there be no strife, I pray thee, between me and thee, and between my herdmen and thy herdmen; for we be brethren.”

He included theirs herdsmen in the family relationship and not just refer to them or treat them as servants.

Unfortunately, Lot did not have the same sense of family that Abraham had and was happy to break away from the covering and relationship he had with Abraham.

Please note that after the death of Haran, Lot’s father, Abraham took up that fatherly responsibility by bringing Lot under his covering but Lot could not see this.

Lot could not understand that he was blessed because of his connectivity/proximity to Abraham and he allowed strife and offence to displace him.

I believe strongly that everyone God has brought or is bringing under the covering of Royal City East Grinstead, He has brought to establish them in the membership of His family, so they may develop to Christlike maturity, be equipped for ministry in the church and mission to the world so that His name will be magnified. You are in for a lifetime of walking with the Lord.

When Lot made his choice of a place to dwell, he made a choice for a place/location that was outside the place God gave an instruction for. Genesis 13:12 says “Abram dwelled in the land of Canaan, and Lot dwelled in the cities of the plain, and pitched his tent toward Sodom.”

There has been a school-of-thought that God did not speak to Abraham until Lot departed/separated from him. This is not true as Lot was not an hindrance or distraction in anyway. Moreover, after the initial instructions in Genesis 12:1, God spoke to Abraham in Genesis 12:7 and Lot was with him anyway.

Abraham would fight to protect and preserve family

And it came to pass in the days of Amraphel king of Shinar, Arioch king of Ellasar, Chedorlaomer king of Elam, and Tidal king of nations;

2 That these made war with Bera king of Sodom, and with Birsha king of Gomorrah, Shinab king of Admah, and Shemeber king of Zeboiim, and the king of Bela, which is Zoar.

3 All these were joined together in the vale of Siddim, which is the salt sea.

4 Twelve years they served Chedorlaomer, and in the thirteenth year they rebelled.

5 And in the fourteenth year came Chedorlaomer, and the kings that were with him, and smote the Rephaims in Ashteroth Karnaim, and the Zuzims in Ham, and the Emins in Shaveh Kiriathaim,

6 And the Horites in their mount Seir, unto Elparan, which is by the wilderness.

7 And they returned, and came to Enmishpat, which is Kadesh, and smote all the country of the Amalekites, and also the Amorites, that dwelt in Hazezontamar.

9 With Chedorlaomer the king of Elam, and with Tidal king of nations, and Amraphel king of Shinar, and Arioch king of Ellasar; four kings with five.

10 And the vale of Siddim was full of slimepits; and the kings of Sodom and Gomorrah fled, and fell there; and they that remained fled to the mountain.

11 And they took all the goods of Sodom and Gomorrah, and all their victuals, and went their way.

12 And they took Lot, Abram’s brother’s son, who dwelt in Sodom, and his goods, and departed.

13 And there came one that had escaped, and told Abram the Hebrew; for he dwelt in the plain of Mamre the Amorite, brother of Eshcol, and brother of Aner: and these were confederate with Abram.

14 And when Abram heard that his brother was taken captive, he armed his trained servants, born in his own house, three hundred and eighteen, and pursued them unto Dan.

15 And he divided himself against them, he and his servants, by night, and smote them, and pursued them unto Hobah, which is on the left hand of Damascus.

16 And he brought back all the goods, and also brought again his brother Lot, and his goods, and the women also, and the people.

Four Kings came and made war against five.

When you are wrongly placed, the enemy can take you. You can never be wrong staying where God has placed you. ~ Ade Awonaike (Genesis 14:11-12)

Abraham launched out to get his family member back with 318 trained servants who were born in his own house.

In Genesis 18, Abraham interceded for Sodom. However, if Lot alone has trained his men and children like Abraham did, Sodom must have been saved.

# Irrespective of the situations or circumstances, Lord let my family be bounded together in unity, peace and love